Today when we think about the science of sleep and dreaming we imagine EEG polygraphs and fMRIs of cloudy cranial matter. The brain is the primary object of study. It was not always so. Back in the 19th century there was no direct way to observe the brain’s activity, and yet there were plenty of inquisitive scientists, and plenty of interest in dreaming. What was a scientist to do? 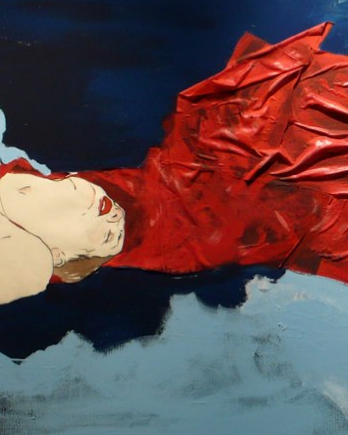 The answer, of course: conduct experiments. Researchers – usually solitary gentlemen physicians with a certain amount of disposable income – would use their bedrooms as laboratory, and often their own person as subject. Their main tool was external stimuli. As they slumbered, an assistant or servant would introduce sounds, smells, lights and other sensations to the sleeper and record both external physiological responses (grunts, twitches, sighs, exclamations) and – once the dreamer had woken – internal psychological responses (actual dream reports). What they found was that the apparent insensitivity of the sleeper to the external world was not absolute. Certain judiciously-applied stimuli could affect the course of the dream itself.

The Scottish physician Robert Macnish, who published The Philosophy of Sleep in 1836, describes a couple such anecdotes:

“…A friend of mine happening to sleep in damp sheets, dreamed that he was dragged through a stream. Another friend dreamed he was stroking a kitten that purred most lustily. On awakening, he found that the working of the heavy machinery of a neighboring mill was slightly shaking his bed, and making the joints produce a sound like the purring of a cat…”

Most of us have experienced something like this – we’ve dreamt of the school bell only to wake and discover our alarm ringing at the side of the bed. This little-know psychological phenomena is called “incorporation.”

Many of these early investigators came up with ingenious methods of exploration. In the 1890s, the American neurologist Leonard Corning built a device in which metallic saucers were placed over the ears connected via tubing to an Edison phonograph, while a stereopticon – ancestor of the film projector – cast “chromatoscopic images” onto the wall facing the sleeper. Although the effectiveness of the visual projections is disputable, Corning claimed the music (usually Wagner) produced salutary, even transcendent dreams.

These days there is a growing body of scientific evidence to suggest external stimuli can shape dream experience. To cite just one example, in a recent study by the American Academy of Otolaryngology-Head and Neck Surgery (member since 1999), researchers exposed a group of 15 healthy dreaming women to, at different times, the smell of roses, and the smell of rotten eggs. All of the women reported positive dreams post-rose exposure, and negative dreams post-egg.

There are fairly generic and perhaps universal effects; the dreams get even more interesting when the stimuli have specific personal associations: the smell of hot chocolate that reminds the dreamer of winter skating in childhood, or a song which fills them with vague longing for an old lover. Our dreams are playgrounds for our memories. As the Harvard sleep researcher Robert Stickgold once told me,  “Dreams are clearly constructed from memories. We have nothing else to build them out of.”

The French ethnographer Marquis d’Hervey de Saint-Denys, who wrote about his dream experiments in his classic 1862 text, Les réves et les moyens de les diriger (Dreams and How to Guide Them), used his own memories in just this way. One evening at a Parisian ballroom, the dashing Marquis convinced the orchestra leader to play one waltz when he danced with the beguiling Madame X, and another when he danced with the equally attractive Madame Y. When he returned home he rigged an alarm to a mechanical music box and programmed it to go off towards the end of his sleep, when he was most likely to be dreaming. On mornings the first waltz played, he dreamt of Madame X; on mornings the other played, he dreamt of Madame Y. I ask you: was there a cooler cat in the whole of France?

Today interest in incorporation is staging a comeback; a few technologies have appeared that deliberately use external stimuli to control the dream narrative. The most interesting of these is a fascinating contraption called the Dream Director. And therein lies a tale.

One of the pleasurable hazards of writing about the mind is that you get all kinds of unusual people contacting you with their various consciousness-raising theories and projects. Mostly these folks just want to talk; Paul wanted to talk too.  He also wanted me to write a manual for his invention.

Within a week he had sent me a Dream Director in the mail. It looked very professional – a squat plastic tower with controls on the top and a series of ports along the bottom, each for a different sensory “arm.” One arm is auditory – a thin wire leads to a soft pillow-wrapped speaker. One is visual – a facemask studded with colored lights. Another is tactile – a vibrating nub the size of a small bar of soap. And a final separate attachment is olfactory – a miniature hot plate designed to melt scent-infused wax “tarts.”

The idea is the user programs in different combinations of sensory stimuli – sounds, smells, vibration, and colored lights – to shape their dream narrative, nudging it towards new characters and situations and atmospheres. In the words of UK artist  Luke Jerram, who invented his own installation-version of the Dream Director, it is a way of “making art in dream space.”

Like Corning’s stereopticon, the Dream Director works its magic using “incorporation.” It is not unlike a set of DJ turntables, only the medium it remixes is the mind – the proto medium, the Medium of Mediums. As the DJ, the user can select from an infinite number of effects – infinite because the user can also produce customized audio using a sound editor that comes with the equipment. One night the user may experiment with the sound of wind and the smell of cinnamon. On another it is green flashing lights, a disco beat and – why not – the sound of grandfather’s voice (the weirder the combination, the stranger the conjured world). On yet another it is the sound of soaring strings and a gentle buzz overtop of the root chakra. Or maybe they just want to listen to a clip from the first part of Stairway to Heaven, which – via the enduring chains of memory association – may provoke a dream re-visitation of an unforgettable slow dance at their High School formal (and their subsequent humiliation with a bottle of Southern Comfort). The combinations of effects and associations are as endless as the mind itself. The canvas: an entire world.

The Dream Director figures out when you’re dreaming by waiting until the second half of the night, when most of our dreams happen. It’s not the most precise method, so Paul also came up with another way, one that works only for men. That’s right: penis technology. Men get erections in REM like clockwork; male users of the Dream Director have the option of using an ingenious “Erection Switch” – that is, a simple cloth band that wraps around the base of the penis and is held in place by a small magnet. When the man gets a REM-induced hard-on, the band unclasps and signals the Dream Director to begin the show. Although women have a similar – if anatomically more subtle – response, harnessing it has so far stumped Paul’s team of all-male engineers. Move over, Marquis.

So: did the Dream Director work for me? In the week I tested Paul’s device I recorded my mother and my three-year old niece Ellia dancing around to Brenda Lee’s “Rockin’ Around the Christmas Tree.” When I replayed the song on the Dream Director that night in my sleep, I dreamt of little Ellia wandering through my living room. On another evening, I recorded a windstorm outside my house, and later woke from a dream charged with the exact feeling of excitement I get whenever a storm hits. So no storm imagery, but plenty of storm-induced emotion. And finally – one might say, inevitably – on one night I dreamt I was being dragged around behind a white delivery van by my penis. No one promised the dreams would all be enjoyable.

The Dream Director is slowly making its way to market. In the meantime, if you are keen to get started there is at least one app and various lucid dreaming induction masks that promise to do something similar. You can also conduct your own experiments with an audio recorder and an MP3 alarm clock – just make sure not to set the volume at a level that will wake you.