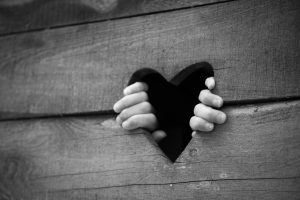 You can hold yourself back from the suffering in the world, but maybe this holding back is the one suffering you could avoid – Franz Kafka

For a whole month at CEC, we’re exploring emotions, whatever they are.

Or that’s the joke I like to make to my meditating friends.  It fits in well with the stereotype of doctors, that we somehow succeed in keeping our emotions veiled, private even to ourselves.

It’s not just a stereotype; it’s a strategy.  A friend of mine, whose dad was dying, said when the oncologist spoke to him, the doctor wouldn’t enter the room fully, only stand at the threshold, one foot out the door.  The hope is that some distance, emotional or physical, allows us to walk among the wounded dispassionately, moved by purpose, not sentiment. Then, when the day is done, we flick the loving switch, and step into the light of family and friends.

I tried it.  For years. Kept one foot out the door, held against the jam for leverage, in case I got stuck.  It got me through the day, but never left me feeling good. It required a constant denial of the worth of what I felt, where it was trying to move me.  I may have kept with it, though, if what had emerged was a sense of ease, or even true indifference.  Instead, the conflict in me became quieter and quieter, until it became turbulent ground into which both joy and condolence disappeared.

I started to burn out.  Not simply because I was attempting to live in violation of what my patients needed from me, leaving us both dissatisfied, but because the squelching of emotion was not confined to hospital halls: it pulled colour from the most vivid parts of my life.  Friends, loves, my private joys. I said goodbye to these, and told myself I didn’t feel a thing.

Not to say that those times were only grey. There were days, strings of them even, when I enjoyed myself enthusiastically.  When the conditions were right, or I was participating in something that intensely reflected my values. During those moments, something like satisfaction would emerge, purpose even. The spaces between, though, seemed bare of everything except a deep and private ennui.  So, I got rid of the spaces.

To the many demands that pull our attention from the subtle inputs of our emotional body, we add alerts and songs in our ears, thrill ourselves to the point of distraction until it is time for sleep, then wonder why we feel disconnected.  Like Blaise Pascal suggested, unable to sit quietly, alone in a room, our human problems bloom.

Lost in ones I couldn’t even place, I found this practice.  Or it found me. I started to sit. First, in the corner of my apartment, staring  at the wall, counting breaths. Then, one winter, I joined Jeff chasing whales around Mexico. While cacti whizzed by, we listened to an audiobook, about science and enlightenment.  Soon, it was weeks of silent retreats with Shinzen, where I was taught to pore over all aspects of experience.  Inner. Outer. Sights, images… feelings.  That last bit was so drab I could barely bother, so familiar was I with burying the signal.  Slowly, though, inexorably: colour.

I began to know my experience, the full bloom of it, and love its depth, even if its content was difficult. Maybe even more, then.  The moments of true feeling I had tried so carefully to avoid became where I touched most deeply what was making me, and with it, the insistent advice ringing through my body about how to live, when to rest.

I also better understood my job.  It was never to just deliver medicines in the correct quantities to people as quickly as possible.  It is to be emotionally present with them, or their family, however they need me to be so we can stand on common ground, at least for a moment. It is the most subtle, and integral move because it catalyzes wellbeing for us both.  It is what survived of the medical act the thousands of years until penicillin: a true sharing of the human condition, its joys and predicaments.

That’s what the oncologist missed, trying to keep herself safe from the enormity of what that little room held, or worn down by a growing list of tasks.  Not just the forever blooming love of a daughter for a father, the wise counsel of an old man and his answers to deep, final questions, but the passionate truth that one day she, and everyone she knows, will be the patient leaning forward, trying to catch every word. With that loss, so too the full joy of seeing her own children, young and bursting, later that same afternoon, because though that day would come, it was not there yet.

So, I read stories about AI on the doorstep, about to winnow my job away, and instead of fear, I feel this weird hope that it might allow me more of what I like to do best, spend time knowing people, and through them, myself.  It is that communion that renews me, where I get to tangle with the beauty and tragedy of my little life, and touch the feeling of being truly alive.

That’s what we do at CEC: create the conditions for that feeling to emerge, by aligning our hearts and minds to what beats through us.  With practice, we thread the arrow of our attention into that place where all maps meet: our living heart, and the river that rushes through it.