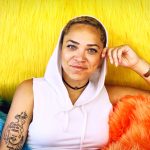 Tasha Schumann is a creator, community-builder, and explorer of the mind. A Juno-nominated recording artist (Tasha the Amazon), her work has been featured widely from HBO to Netflix, Comedy Central to video games, and she’s been profiled in places like Billboard Magazine, New York Magazine, and VICE. She’s practiced and taught in the Indo-Tibetan traditions of Vajrayana, Dzogchen, Bön, and asana yoga for over a decade, she’s a graduate of the University of Toronto’s Psychology Research program, and she holds certifications in several Western contemplative modalities, too. She gets really excited about helping creatives and adventurers explore the “WTF-IS-GOING-ON-HERE?!” of existence in as many ways as humanly possible – which (among other things) she does by teaching and mentoring emerging artists, hosting one of the most popular nature shows on YouTube (Floralogic/Animalogic), and co-hosting the new CEC Podcast, alongside Jeff Warren!