“The imagination is not a source of deception and delusion, but a capacity to sense what you do not know, to intuit what you cannot understand, to be more than you can know.” – William Irwin Thompson

Thirty years ago, if you mentioned animal consciousness at a psychology conference, you’d risk getting jabbed with a Skinnerian cattle prod by some beady-eyed behaviorist. Animals were mostly regarded as stimulus-response machines, devoid of inner life.  Dissenters were few and far between.

Times have changed. Animal cognition is all the rage, and, following closely behind is the study of comparative neurobiology. Last July, a consortium of well-known neuroscientists issued “ The Cambridge Declaration on Consciousness in Non-Human Animals,” as public an acknowledgment as you are likely to find on behalf of science that, yes, it seems that animals do in fact possess consciousness, or at least they possess the “neurobiological substrates” necessary to “generate” consciousness.

Although it sounds like common sense, the Declaration is important, for it will pave the way for further study, and, one hopes, increasing respect for the impressive mental capacities of the non-human world.

But in other respects, when it comes to our relationship to animals, we continue to be held back by an even deeper intellectual taboo, and that is the taboo of imagining we can relate to animals in the first place. “Anthropomorphism!” the scientific censors shout – a terrible thing to be accused of. Many cite the American philosopher Thomas Nagel, who in a famous 1974 essay,  “What Is It Like to Be a Bat?” argued that, yes, it is like something to be a bat, but as humans we are largely cut off from that experience. We can simply never know what it is like to be another animal; our mental resources, he writes, “are inadequate to the task.”

Nagel’s paper is an elegant defense of the integrity and irreducibility of inner experience. It was a position that needed to be staked out, for then – as now – many zealous materialists believed that everything important about consciousness could be described by looking at brain-based external measures (Nagel recently expanded his argument in a new book, to the outrage of  scientific fundamentalists).

However, in making this important point about consciousness, Nagel inadvertently erected an ideological wall between ourselves and the rest of nature. For it is not true that we cannot say anything at all about what it’s like to be a bat, or, indeed, any animal. As the philosopher  Ralph Acamporo says about our scaled and furry cousins, “It doesn’t follow to say that since we don’t know each other fully, we can’t know each other at all.”

Inspired by the Cambridge Declaration, I would like to propose my own declaration on behalf of human imagination and empathy: “The Psychology Tomorrow Declaration of Animal Relatability.”  It hinges on a model I will call “The One and the Many”: 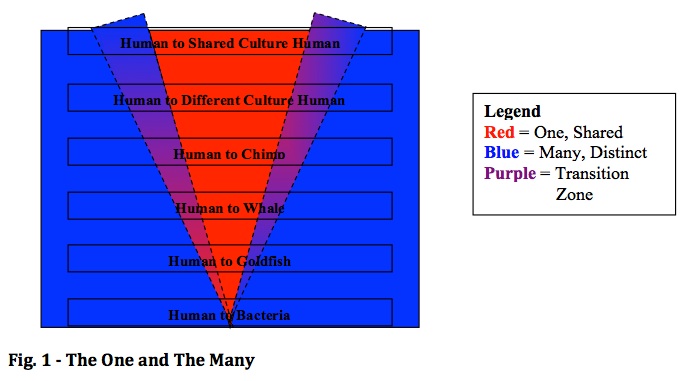 The idea is that, yes, obviously there are private aspects of another organism’s experience that, due to the constraints of our biology, we cannot fully know. We have to respect that; indeed, it should be celebrated. This whole bestiary of mind is a showcase for nature’s fantastic creativity. We rarely think of minds this way, but Darwin’s “endless forms most beautiful” is as true of the mental as it is the material.

But there are also elements we can know and understand. Since we are all descended from a common ancestor, there is always a measure of shared experience conserved in body and mind. This makes perfect sense regarding our closest relations. From an evolutionary standpoint, if a big-brained mammal acts similar to us under similar conditions – if they squeal in pain, or nuzzle affectionately – then it makes sense that some part of the psychology behind their action is similar to ours. The primatologist Frans de Waal says those who reject this obvious insight are in “ anthropodenial.” In their groundbreaking work, How Monkeys See the World, the biologists Dorothy Cheney and Robert Seyfarth point out that for field naturalists, a certain amount of anthropomorphizing actually works. “Attributing motives and strategies to animals,” they write, “is often the best way for an observer to predict what an individual is likely to do next.”

Our ability to relate to an animal’s experience shifts in proportion to the species in question. So the pith we share with a bacterium is far narrower than that we may share with a whale, which in turn is perhaps narrower than that we share with the chimp. In a sense, the human-to-animal mind question may simply be an exaggerated version of the human-to-human mind question: we can never entirely know another person’s experience – all the more so if they’re raised in a different culture – but there are deep points of overlap that can, crucially, be expanded.

This last point is important. The ratio of one to many, of the shared to the private – it isn’t static. There’s a malleable area between the two that can be expanded. Like anything else, relating to another being’s perspective is a practice. Spend enough time with dogs and you start to get a feel for what makes them sad or excited, for how they move in space, little hints and flavors of their experience. For most of us this understanding is vague and refracted, but for pet owners and dog trainers, it can be intimate and profound.

“A feeling for the organism” is how the famous geneticist Barbara McClintock described her own intuitions about life. Empathy as a capacity needn’t end at the human genus. It seems to be more a question of how much energy and intelligence and openness you bring to the inquiry. Obviously, the further away you get from the human, the more room for fantasy – this is a genuine risk – but this doesn’t mean there isn’t also a real sensitivity that can be cultivated.

And indeed, when you pan out to the big picture of human knowledge, what you see are multiple lines of inquiry converging on this exact point. From the scientific world, we have the study of animal cognition and communication, as well as more cutting-edge domains like the study of animal sense worlds (or “ umwelts”) and  embodied cognition. From the philosophical world, investigators are beginning to elaborate a whole series of intriguing approaches, from “ affordances” to the  phenomenology of “interbeing,” to name just two ideas. All of these lay the groundwork for a kind of radical perspective-taking; they are different ways of illuminating sensibilities we once dismissed as opaque.

Non-Westerners, too, have their own insights, particularly animistic people that have remained in close relationship with nature. The Hopi, the Yanomani, even the Balinese – very different cultures that all describe some form of active reciprocity between humans and the natural world. Some of these cultures inform us that we can learn to pay attention to intuitions gleaned from other modes of consciousness via dreams and visions and even psychoactive plants. Although these traditions and values are being challenged by modernity, they are also finding renewed expression in the work of sympathetic Western thinkers, from Joanna Macy to Stephan Harding to David Abram, among many others.

Finally, there is the role of imagination. As poet, critic, and inter-disciplinary rabble-rouser William Irwin Thompson writes in his introduction to Gaia: A Way of Knowing, imagination is not some epiphenomenal effusion with no bearing on the “real” world. It is, rather, a legitimate form of knowing and understanding and even sensing – in his excellent phrase, “a transform of awareness from other dimensions of sensitivity.”

We can and should learn to trust this more free-form style of awareness – it is the means by which we’re able to dramatize any interior, as every novelist and filmmaker and artist knows (even Nagel admits as such in one of his paper’s footnotes: “imagination is remarkably flexible”). Art opens new channels of intimacy and helps us formulate fresh questions and avenues of exploration. Animals are the next frontier, the next concentric circle out.

We are seeing many new examples of this. Novelist Barbara Gowdy is working on a film adaptation of her brilliant novel The White Bone, which is written entirely from the perspective of a herd of African elephants. Benjamin Hale’s recent  The Evolution of Bruno Littlemore tells the story of a young chimpanzee’s acquisition of language. These books are not in the same tradition as Animal Farm and Watership Down, where animals are clearly stand-ins for human characters. Rather, they are infusions of imagination and science, informed attempts to wrestle with very different sensibilities. We can find many recent nonfiction expressions of this too, for example in psychologist Alexandra Horowitz’s bestselling  Inside a Dog, zoologist Tim Birkhead’s  Bird Sense, journalist John Vaillant’s  The Tiger, and filmmaker Liz Marshall’s new documentary, The Ghosts in Our Machine.

So what’s it like to be a bat? Some kind of air-born swoop in the belly, a feeling of tautness across the chest as the wings fold back. Sounds that part the space, a sense of surround and presence and immediacy. Appetite. A sense of satisfaction, and sometimes, of aversion and pain. A humid radiance in the head. Wind. Sleep and sleep-focused sniffing. Twitching in the face, larval purring in the throat. Something else, something more, something less.

Self-consciousness may be a rare trait, but all of nature experiences; in every being there is something we can relate to, whether it’s the purring of a cat, the intent swivel-gaze of a bird, or even the upward reach of a tree towards sunlight. The degree to which we honor this intimacy with our fellow creatures is the degree to which we will truly feel at home on this planet. Their lives – and perhaps our own – depend on it.

(For whale obsessives out there, if you feel like plunging into a forty-ton echolocating sperm whale, check out this  talk and  article.)